With an obscure name like Mangold, the information is quite scarce as to its origin (see my post regarding its origin here). I still never expected to stumble upon the odd sport of Mangold Hurling…yes there’s a sport that involves hurling Mangolds!

I have been fascinated with the Mangold name since childhood. I’ve heard stories of it being a Jewish swap of Goldman to Mangold. I heard it was two names combined to mean worker with gold, but the most believable and compelling is referenced HERE.

On this website you can even find the following…

Mangold is Mangelwurzel
According to Wikipedia Mangold is the English name for the Mangelwurzel. The mangelwurzel has a history in England of being used for sport (mangold hurling), for celebration (mangold lanterns at punkie night in Somerset), for animal fodder and for the brewing of a potent alcoholic beverage.

A mangelwurzel hurling championship was revived in the north Wiltshire village of Sherston on October 7, 2006. Teams of three hurled mangelwurzels in turn, aiming to be the closest to a large leafless mangelwurzel known as ‘the Norman’.

It is also the source of the name for the English folk/pop/comedy musical group The Wurzels.

Most city-dwellers in England have only the vaguest idea of what a mangelwurzel is, and tend to associate the vegetable with the stereotypical country bumpkin character in comedy. The word is even used as a double-entendre, for example by the character Rambling Syd Rumpo (Kenneth Williams). As usual, some entertainers from country towns embrace the stereotype, as above.

The first encounter with the mangelwurzel for many children may well be through the book Muddle Earth (2003) by Paul Stewart and Chris Riddell, in which the mangelwurzel is the staple diet of the trolls. It also appears in George Orwell‘s Animal Farm, in the fourth stanza of the ballad “Beasts of England.”

The mangelwurzel was mentioned prominently in the book Jitterbug Perfume by Tom Robbins.

It also makes frequent appearances as a sheep’s treat in the sheep detective novel Three Bags Full by Leonie Swann.

Mangelwurzel is given as a genus of a scarecrow in the children’s programme Worzel Gummidge.

In Closing
You can’t make this stuff up folks…I wonder if in their wildest imaginations if the originators of this sport would have thought that today’s definition of “hurling” could be the same as vomitting? I also wonder if they ever thought that someone’s last name would ever actually be “Mangold?” So combining the two and making a sport out of it just leads to the disgusting imagery I’m not prepared to entertain!

So, if you ever plan on hurling a Mangold…there are rules pal and you better follow them to the tee! I’d hate to have to refer you to the Mangold Hurling Association for failure to hurl in the proper manner!

Preface
Mr. Peter Mangold from Switzerland was kind enough to leave this information on our blog regarding the origins of the Mangold name. His original comment can be found HERE. I hope those with our unique name will find this helpful. A special thanks goes out to Peter for his research.

Introduction
I just found your blog as I out of curiosity entered my own name in Google. I’m a Mangold from northwestern Switzerland, a Region where this surname is relatively widely spread. In fact, as I know, the Mangold surname originated in southern Germany, a region not far from northwestern Switzerland. Still today, most bearers of this name in Europe live in this area. As far as I know, the ancestors of my family moved in from there somewhere at around 1400 – 1500. Around the year 1500, according to parish registers, a Mangold family lived in the tiny town of Böckten in the Canton (State) of Baselland. The very town my grandfather was born 100 years ago. Today, the village and its neighboring towns are still home to quite a lot of Mangolds – I grew up only a few miles away. (Official Böckten Website)

Mangold Origins – Personality to Rule
As of the origin of the name, I have other information than you: Personally, I think an origin in either Spain or Italy is unrealistic. First of all, mobility in the Middle Ages was much lower than today (very much lower!) and only very few people moved very far from where they were born. in fact, moving out of a certain area was even prohibited by the authorities in certain regions (because the people were subjects of their lords – and required a permission to move and even to marry outside of their district). Secondly, even if somebody settled down far away from where he came from (for example mercenaries that could not or would not return home), they were mostly given names referring to their place of origin rather than they kept their own names. This was not unusual, as in these days, people had normally only one name and their “last name” was either their fathers name, their profession or described where they lived (take as an example the Swiss-German name Amstutz meaning “the one who lives on the steep slope”) Therefore names could change quite quickly. When the need for proper identification became bigger as bureaucracies were created to administrate regions and rulers began to make lists of their subjects – such as parish registers – some names became permanent last names. These could again derive from either profession (for example Cooper and Miller), places or from a previous “first name” (so called patronymic). That was the case with Mangold as Mangold was – in the Middle Ages but no more today – a popular first name. It is in its development related to the name Walter – a german name that still is today both first name and last name. And as it is the case with Walter, it refers to a leadership position: Walter has its roots in Old German “waltan” and “heri”, meaning “to preside over, to dispose” and “army” as in modern German “walten” and “Heer”. Mangold derived from “manne” and “cwolt”, meaning “men” and “force, sway, violence” as in today’s German “Männer” and “Gewalt”. So it described someone who had the power and personality to rule.

I guess, the “legend” of an origin in Italy comes from a mistake (See referenced post here). Mangold is not only a name for a person but also the name of a plant in Germany (Chard or Silver Beet in English) and this plant has its origins around the Mediterranean Sea.

Now here’s a handsome man. My great-grandfather Earvie, Sr. is pictured here in his “Sunday Best.” My grandfather, Earvie J. (probably for junior) was his name’s sake. Pardon the quality of this picture, it’s a picture of a picture, so it’s not the greatest, but (pardon the pun) “you get the picture.”

Sadly, Earvie was hit by a car and killed when my grandfather was just 3 years old. Ida (or Maw Mangold), my great-grandmother later married Clarence Edward (or Paw Mangold), Earvie’s brother, who never fathered any more children with Ida. 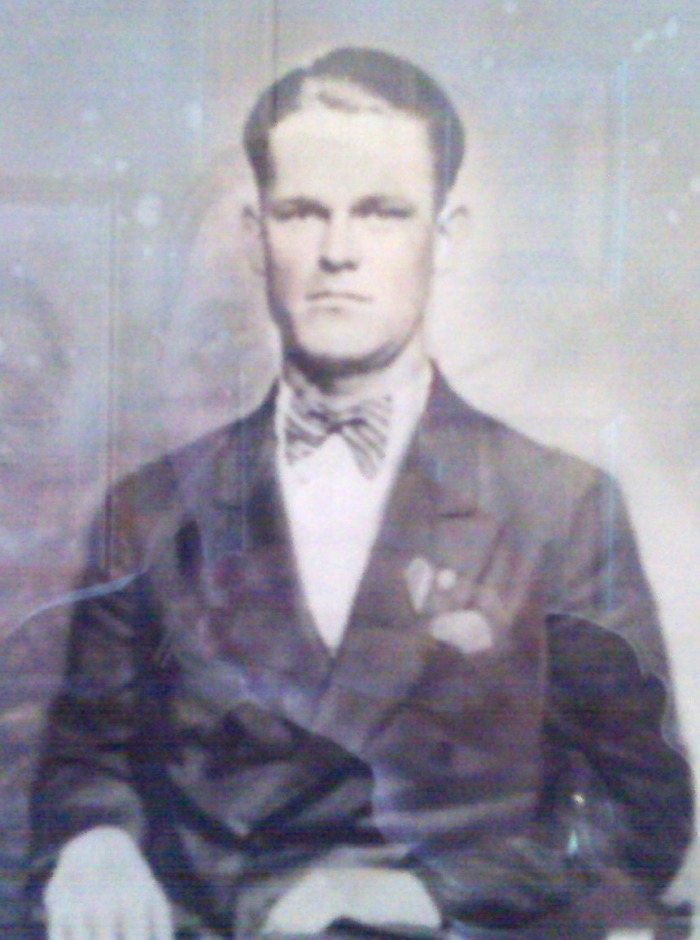 Dating back many centuries, the Mangold Name may have taken on many variations. According to this information found on the web, there are some alternative versions of our name that are of either Spanish or Italian descent. See BOLD paragaph under the Italian portion for specific “Mangold” reference.

BLAZON OF ARMS
Gules, a fesse of the same, indented argent, of four pieces in chief, and of three pieces in base.
TRANSLATION
Azure, or blue, symbolizes the planet Venus while Or, or gold, symbolizes the Sun.
CREST
An apple tree, fructed all proper.
ORIGIN
SPAIN

The place-name Manzano is derived from the Spanish word “manzano” meaning “apple-tree”. A branch of this family had their “casa solar” or “ancestral seat” in San Martin de Don (Burgos). Another branch was established in the town of Azagra (Navarra) a member of the latter one Fernandez de Manzano introduced the name to Chile.
A certification of nobility was granted to the Fernandez de Manzano family. The following are listed in the Orden de Carlos III: Esteban Manzano, Juan Iganacio Manzano and Baltasar de Manzano. The title of Marques Justis de Santa Ana was held by Manuel Jose Manzano y Justia Sandoval Garcia y Umpierres.

There are a number of explanations as to the origin of the Italian surname Manzano.

BLAZON OF ARMS
Gules, a fesse of the same, indented argent, of four pieces in chief, and of three pieces in base.
TRANSLATION
Gules (red) denotes Military Fortitude and Magnanimity.
CREST
Three ostrich plumes one argent, between two gules.
TRANSLATION
The plumes signify Nobility

ORIGIN
ITALY
First of all, it is occupational in origin, being derived from the work a man did or the profession he pursued. In this case, Manzano is associated with the Italian word “manza’ which means “heifer”. Therefore, the initial bearer of this surname was a farmer or cowherd. Alternatively, Manzano may in fact be local, this time deriving from the place where a man once lived or where he once held land. Here the name is again linked to “manza”, meaning “heifer”, but it would have been applied to one who lived in the sign of the heifer.

In the Middle Ages, pictures of animals and birds were hung in front of inns and hostelries so that they would be easily identified. The original Manzano may have lived near an inn, which bore the picture of a heifer. Finally, some modern bearers of this surname may have German links.

In the year 1083, a family moved from Bavaria to Friuli and the name became “Manzano”. Undoubtedly, the German form would have been named Manzo, which is of patronymic origin, being derived from the first name of a father. It is related to “Manza”, a short form of the German personal name “Mangold” and means “son of “Manz”. An early record of this surname in Germany is in 1286 when one Dominus Mano is on written record in Sindelfingen (Wurttembergisches Urkundenbuch).

In Italy, there are numerous early records of the surname. In 1212 there is a mention of the “Castle of Manzano” (Dizionario Storico Blasonico), while in 1267 one Corrado Manzano was made a member of the government of Friuli. Variants of the name include Manzano and Manzanese. One can also find the Manzano Town in the Northen part of Italy.

Here I will endeavor, with the help of my relatives, to populate what information we can collect about the geneology of the Mangold Clan that currently hails from southeast Missouri. The details are sketchy, and the dates are not firm yet, but the following is an attempt to connect the dots.

According to undocumented information our branch of the Mangolds hail from what was called after World War II, East Germany, what was known as Frankfurt on the Oder. Frankfurt on the Oder (or Frankfurt an der Oder), is not to be confused with Frankfort am Main. Based on family reports, the Mangolds are of East German-Jewish descent. The exact time of thier immigration to the United States has not yet been determined, but based on estimates, is close to late 1800’s or 1900’s.

To the best of my knowledge, here is what I can determine thus far. I more than likely do not have the birth order correct for some of the earlier generations so information here would be helpful.

2. Mary Cecil, Earvie Sr., Clarence, Grace, Lola, Orville, Lloyd, (and several others that I have not confirmed yet) Mangold

3. Clarence and Ida had no children together